Being the perfect Valentine of someone's fantasy. The classics of a Good Old English architecture combined with a sturdiness of a motorbike rider, a laxness of a Dandy look and of course the romantic power of roses. 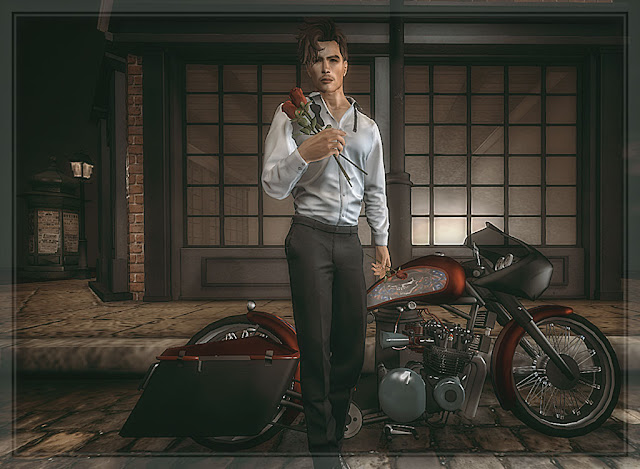 All new and shiny OR C1300 motorbike by Optmus Race. This motorbike makes your Valentine possible to join the ride. A realistic view and feel for a virtual ride. Light, sound and smoke effects and low lag riding are just a few of many features of this vehicle. Comes in three sizes to fit any avatar. Land impact is 45 and the price is 900L for now (normal price is 2000L). Available via the marketplace (https://marketplace.secondlife.com/p/OR-C1300-CONFEDERATE-CONSTELLATION-BOX/10706002) or in-world at http://maps.secondlife.com/secondlife/Copacabana%20Rio/164/127/3883

La vie en Roses poses and props by Luanes World. A rose admiring (or offering) female pose (which looks perfect on a male as well as you can see) comes in two versions (one is a mirror of another) and three rose props (two single roses for each hands and a rose bouquet). Available now at the current round of Très Chic  (http://maps.secondlife.com/secondlife/Nika/128/121/2001, January 17th - February 10th 2017). The price is L79. And there ia also a lying down pose for L99.

The good old Sven outfit by MGMen's which I love to use for the romantic scenes playing a Dandy. Was presented at Signature Event, but now still available at MGMen's store - http://maps.secondlife.com/secondlife/Treasured%20Haven/207/72/22, Today in classic black and white. Open bow tie as always. Three pieces, four color variations. The price is L350 for pants or shirt and 100L for a bow tie. Fat packs of all four are available at 25% discount. There are demos.