From Dusk till Dawn

When dusk falls to the place it's time for a usual night gathering at the local café. Arriving in style as always. My wine is ready and served outside.The unicorn skull will keep the undead away just long enough to let me finish the bottle. Another survival quest will start again. Will I make it till dawn this time? 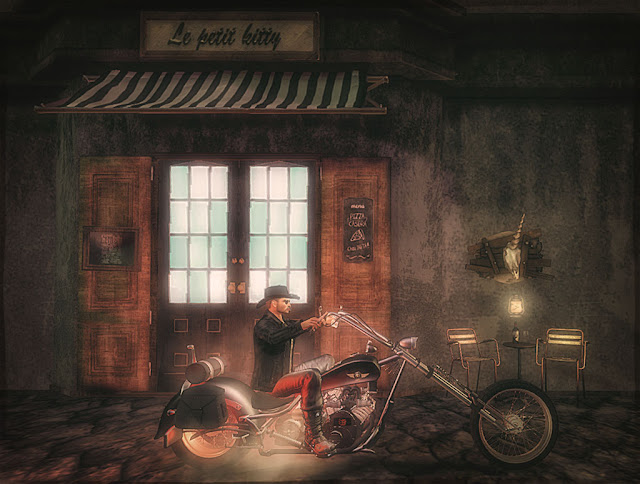 Optmus Race presents the new OR K1000 Freedom that comes in three versions. For racing, touring or a static version for picture making with 600 poses included. With a land impact of 51 (standard) or 59 (static for photography) it has all the features like shadow, fans running effect, smoke, realistic lights, burning tire and different sounds among others to give the realistic experience in Second Life. Available either at the mainstore (with the demo area available - http://maps.secondlife.com/secondlife/Copacabana%20Rio/163/114/3906) or at the marketplace (https://marketplace.secondlife.com/p/OR-K1000-FREEDOM-SERIES-600-poses-BOX/9434542) for 3000L.

Mushilu's Cafe Dark consisting of a wall (with different colors of frames) and eigher one or two floors café frontage. A decoration prop for Second Life photography. Either for a dark scenery like shown in "From Dusk till Dawn" or an old café pictures. Land impact is 3 for a wall, 17 for two floors frontage or 8 for one floor prop. Available now at Très Chic (Feb 17 - March 10, 2017 at http://maps.secondlife.com/secondlife/Nika/128/121/2001).