Here is my Secret Chamber where I deal with shit life gives me sometimes. Royal Flush is the ultimate weapon I use in those situations to take another clean start. And sharing this secret with you is my Royal Gesture to you all. 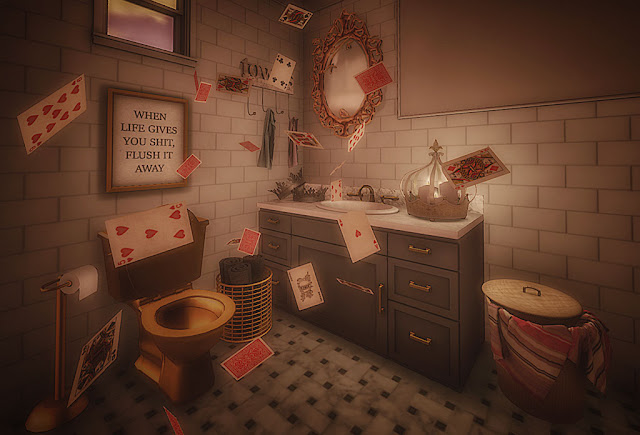 A new Queen's Bathroom set by Fiasco Forniture presented at the Gacha Garden (http://maps.secondlife.com/secondlife/The%20Gacha%20Garden/127/151/22), The set consists of 10 commons, 1 rare (the Golden Toilet you see on the picture) and the Seed of Inspiration, a gift that you get after you've played 20 times. And for those who are not into teasing the fortune, there is also a gift just for passing by - three bathroom signs with inspirational quotes (you see one of them on the picture). Though it's presented as a Queen's set, it feels perfectly comfortable under the royal King's derrière.

And to make the bathroom decoration more personal the Black Jack's Bathroom Gacha can be used to provide more variations. Available at Black Jack's main store for 50L per play. (http://maps.secondlife.com/secondlife/Cies%20Island/225/26/24). Nice commons and one rare.