Bonjour chérie! Bienvenue à Paris! I have collected the sweetest things Paris can offer for our romantic moments together. And don't worry about the calories. We shall burn them later... between the sheets. 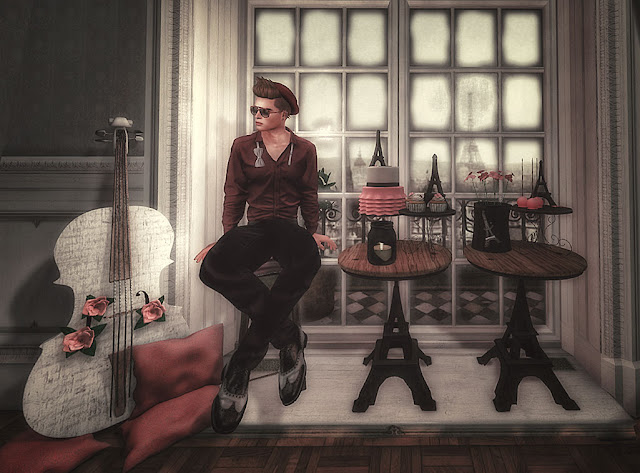 The sweetest things Paris can offer - Amour a Paris gacha by Your Dreams available at the current round of Très Chic  (http://maps.secondlife.com/secondlife/Nika/128/121/2001, January 17th - February 10th 2017). There are 6 commons and 2 rares, items like Cupcakes and Macarons presented on the Eifel tower decorated plates. There are also a table, a bench, flowers and a candle - the full set for a romantic date. The price is 80L per round. All items are displayed at the vendor. Land impact is about 1-3 per item.

And Sven outfit by MGMen's keep to be my favorite piece of clothe for the romantic pictures. Was presented at Signature Event, but now still available at MGMen's store - http://maps.secondlife.com/secondlife/Treasured%20Haven/207/72/22, Red shirt, the color of passion and yes, the bow tie is already untied as it's getting hot here.