Wishing you all stunning 2017 filled with beauty, joy and happiness! 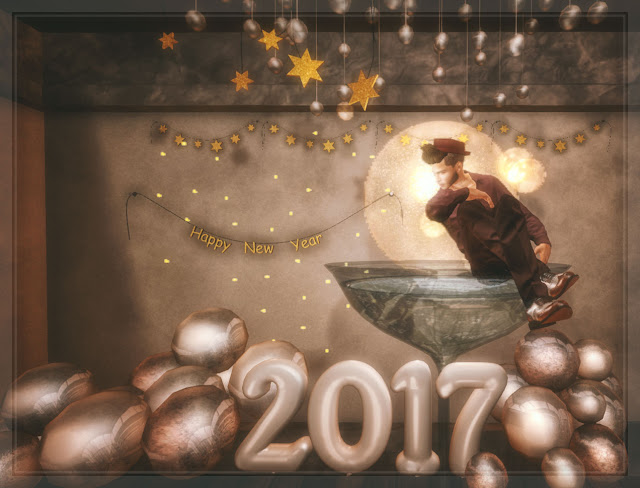 Chez Moi made it easy to make a great Happy New Year card for 2017. With their 2017 Photo Booth you get a ready to use set of props with animations. It's as easy as rezz, jump in and take a picture. And to enhance the party mood and give more variations to the pictures there is also A New Year set with lights, stars and strings. And I love the fact the Booth can be modified, so all the props can be unlinked and used separately. The 2017 Photo Booth is available at Très Chic event December 17th - January 10th, http://maps.secondlife.com/secondlife/Nika/128/121/2001) for 160L, the New Year decorations set costs 80L.

evoLove has prepared some pin-up poses for a classic glass of champagne subject. You can buy a separate pose for 50L at Très Chic event December 17th - January 10th, http://maps.secondlife.com/secondlife/Nika/128/121/2001) or the Fat Pack for 499L which includes the big Champagne glass to pose on and a small one to wear.

MGMen's Sven outfit keeps to be the perfect dress code for any party. This time I tried the red one.

[ hoorenbeek ]
Mesh Thaladar Shoes /with Socks/ (part of an Aldous outfit from The Mesh Dept, October 2016)