During the day he is just a street musician who plays the guitar next to his devoted dog. But during the night he is hunting the underworld monsters. Look closer. There is a gun hidden inside inside his guitar loaded with silvered bullets. And is it a dog? Or a wolf whose sense of smell is good in detecting the creatures from the underworld. It's time for action! Let's see who is hiding behind that door 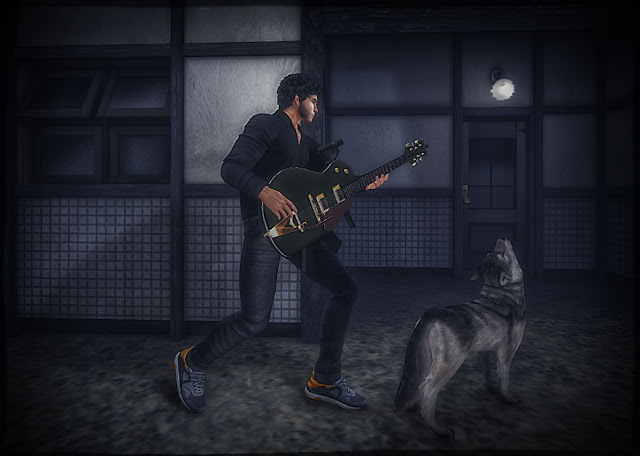 Fearsum's Mike mesh outfit consisting of a long sleeve shirt and a skinny style jeans available now at the Darkness Chamber Fair (http://maps.secondlife.com/secondlife/Secret%20Chamber/153/58/651). It comes in 6 different body types sold separately: Adam. Singature, Niramyth, The Mesh Project and Classic Avatars. Each piece has a HUD with 10 color variations for a shirt, 3 color variations for jeans, 4 for the belt and 2 for buckle metal. The price is 195L per body type.

And for footwear I wear the MGMen's Salut Sneakers again. The Sneakers are available at Shiny Shabby now (http://maps.secondlife.com/secondlife/Shiny%20Shabby/131/94/22). The sneakers come in four color variations (white, grey, brown and black) and each of them is customizable with a HUD for minor adjustments of sole and ornaments. The price is 500L per color variation and there is a fatpack for 1500L. The sneakers come in Signature (Gianni), Slink, Maitreya, standard and fitmesh options..


Posted by Chris Chronicles Blog at 11:00 AM