A part of the lost tarot deck existing only in the Underworld. The hidden arcane of Repentance. There is a lot of repentance in the world of darkness. Its peculiarity is that it's eternal as everything inside this realm. 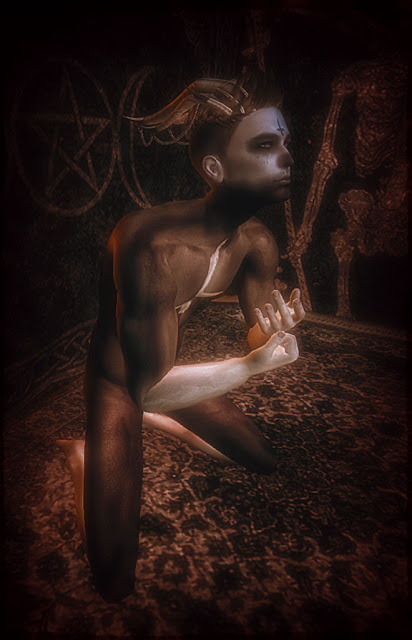 Black Rose Designs (mainstore)
A pair of horns decorated with metal tips and chains. Comes with three color variations for the horns and four metals for tips and chains. Customizable via HUD. The horns are unisex. The price is 149L.

Oubliette (mainstore)
Macabre rug set is used for the floor and walls on this picture. A set of 5 rugs for a true sorceress. Next to two oriental patterns there are also a pentagram, ouija and Death Tarot Arcane versions. Dark and distressed textures. The price is 300L for a set.

All three are available at the current round of The Darkness Chamber Fair from March 11 till April 1st, 2017.

Light and Photography: LumiPro 2017
Posted by Chris Chronicles Blog at 10:11 AM