He has accepted urban jungle as his new habitat and learned to wear a shirt with a bow tie. The parks are his favorite place to be as they remind him of the woods he came from. Sitting there among the flower he waits for his next victim. Hopelessly in love as he always was. 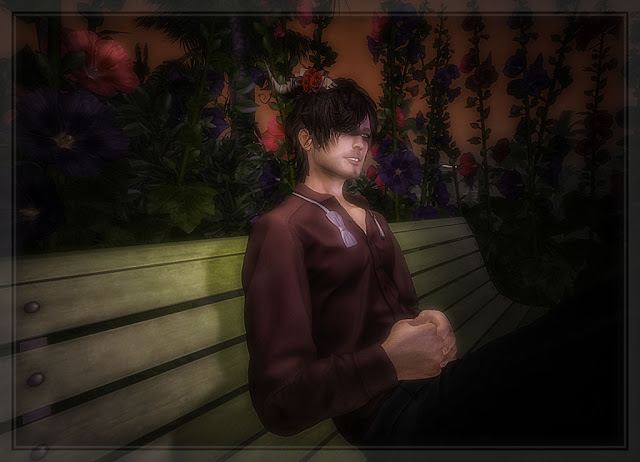 CHEZ MOI (mainstore)
Park Bench Rainbow is used both as a prop and for the pose. Comes in all colors of the rainbow (to change via a HUD). There are 24 single animations for male and female 10 activity poses (male, female, couples), 36 couple poses, 16 family animations and 48 adult actions. Available in PG, family and Adult versions. The land impact is 2 for PG and 3 for Adult or Famiy. There is also a tree holder with Li of 1. 100% mesh. Available now at The Chapter Four (March 4 - 20, 2017).

Stelloane (mainstore)
Hell Babygirl horns is a nice pair of scales covered horns decorated with roses including leaves and a twine. The HUD allows to choose between 14 color variations for the horns, 7 for the roses and two for leaves or a twine. While wearing a "Babygirl" name the horns are perfectly suitable for a romantic man. Available at the current round of The Darkness Chamber Fair from March 11 till April 1st, 2017.

W:6 (marketplace)
Cross out tattoo provides a dark stripe above the eyes creating that seductive mystery look with a Gothic touch. Unisex. CATWA and Omega appliers available. Tattoo is available in three variations. Available at the current round of The Darkness Chamber Fair from March 11 till April 1st, 2017.

MGMen's (mainstore)
Sven's shirt and an unbuttoned bow tie are great to express the well mannered frivolity within a romantic scene. The matching pair of pants is also available in the store. All items can be bought separately in each of four color variations or as a fat pack. Demo is available.

Light and Photography: LumiPro 2017
Posted by Chris Chronicles Blog at 12:03 AM